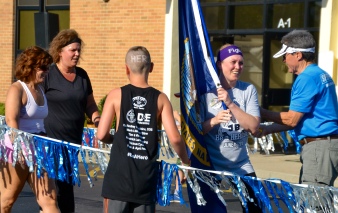 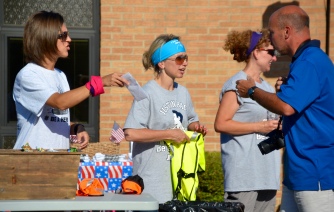 The community of Waynesville came together to celebrate the 2nd Annual Justin Back: Be A Hero 5K Run/Walk to help benefit the Justin Back Be a Hero Scholarship Fund. Hundreds of participants came out to support not only the tremendous loss of a community family but for a good cause. Participation grew from the first year and hopefully as word spreads, each year it will grow.

The residents of Waynesville remember Jan. 28, 2014 like it was yesterday- especially if they had children that went to school with Justin Back – like mine. It’s a parents worst nightmare. Waynesville is a small community where violence doesn’t happen – at least so we thought. But, violence did happen that day and it caused the life of a young man who had his future ahead of him.

On Jan. 27, Justin Back of Corwin, in the neighboring town of Waynesville, allowed a childhood friend and another boy to his home. Austin Myers, 19 of Waynesville and Timothy Mosley, 19 of Dayton appeared to be friendly when in reality were casing out the home to prepare for their next part of their plan- unbeknownst to others. After leaving the Back’s home, Mosley and Myers went to Lowe’s and Dollar General to buy the supplies needed for the next day.

When Justin’s parents returned home from work on Jan. 28, they called the police reporting a burglary. After further investigation, Back, 18 was also reported missing. The police indicated that the scene showed signs of a violent crime and the search began for Back. He was later found in an undisclosed location in Preble Co. He had been choked, stabbed and shot. It was a dark day in our little community – but more so for the Back family and the future of a promising young man that was getting ready to go into the Army  just a week after his death.

It wasn’t long before Mosley and Myers were arrested for the murder of Back. During the trial, it was revealed that it was said the Back’s had $20,000 in a safe. They planned to murder Justin, steal the money. Mostly was homeless and desperate.

The plan was to strangle Back and dispose of his body in the nearby woods, but Back fought for his life. He ended up being stabbed over 20 times and shot. The boys detailed the plans of their attach in a spiral notebook.

Back’s father made a statement during Myers’ trial. He said, “I’m not going to stand up here and tell you how much I hate you. I would just hope that every time you close your eyes at night, you see my son.”

Mosley testified against Myer to avoid the death penalty. He received life in prison without the possibility of parol. Myers was sentenced to death. Myers’ execution has been stayed while on appeal in the Ohio Supreme Court.

In the safe, they didn’t find the money. They found paperwork, loose change, bullets, a gun and other random items.

Justin Back will always be remembered in Waynesville.

Recipes for those on the AIP diet, like me!