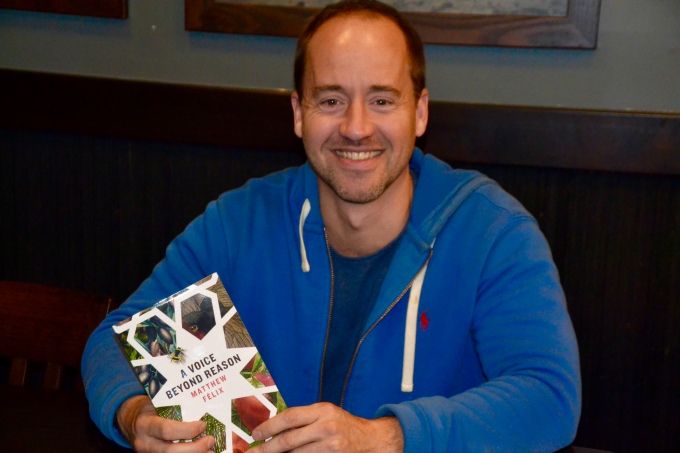 Former Beavercreek graduate, Matthew Felix, left home after graduation to not only explore the world but find his purpose. As a result, he found a world of beauty, inspiration, and the backdrop to his latest fictional novel, A Voice Beyond Reason. His novel was recently released and now available for purchase.

“The story takes place in Andalucía, Spain. That’s where I was at the time I started writing this story,” Felix said. “It’s a little village on a mountainside with less than 2,000 residents. From my doorstep, I had a great view of the Mediterranean Sea. I already had the story idea in mind, but after being there for some time and the fact that it was so beautiful, I realized it be a perfect setting for my book.”

Felix moved away from Beavercreek over twenty-six years ago, after graduating from high school in 1989. After years of traveling abroad, he now resides in the sunny lands of San Francisco. But, before settling to the west, he traveled and lived in Spain, France and Turkey. He even traveled to Morocco a couple of times where he had endless misadventures. As a result, he also published a series of short stories memorializing his trips. Praise for with Open Arms: Short Stories of Misadventures in Morocco is a rendition of the comical travels. He wrote and published it when taking breaks from finishing this novel.

A Voice Beyond Reason took Felix approximately 6 years to write and put into final form, all the while working full-time in the corporate world. It’s a story of a young man’s coming of age after tragedy strikes his family, leaving him questioning his current situation, desires, needs and dreams. With Felix’s colorful imagery that paints the lands of the Mediterranean, the twists and turns of this heartwarming story takes the reader on a journey of the heart. Felix’s flirtation with Spain’s unique landscaping gives flavor to the characters and the story.

“The house was located on a large plot abutting a small but very
steep scrub-covered valley. On the other side, a huge mountain
flank rose up into the sky, covered in patches with the yellowish-
green leaves of the local grape variety. A small vegetable garden
had been planted within sight of the porch, and carob, fig, and a
couple of pomegranate trees dotted the property, in addition to
the terraces of olive trees Pablo had seen on the way down the
driveway.”

“Now accompanied by the pleasant trickle of the man-made
stream, Pablo arrived at a ruin hidden among a dense, unkempt
olive grove. A steep segment of trail followed, at the top of which
was yet another sharp turn, bringing him to the most dramatic
part of the hike. It didn’t matter that he had seen it all countless
times before. It was breathtakingly beautiful.”

Not only does Felix have abundance of landscaping traits of this specific Spanish area, but he also draws in historical traditions of Andalucía, to create even more imagery.

“Every night for a month before the event, a large cannon had
been fired off, a ritual whose purpose historically had been to
remind people in the countryside that the festival was fast approach-
ing and they needed to start making preparations for the journey
into town.”

During the main character’s journey, he befriends a previous older neighbor who ends up helping him dig deep into his inner voice to decide the path that is best for him.

“Listen to what you hear in the silence… pay attention to it.”

In the end, the young man faces the question that haunts many. A decision is shortly made to finalize his dream and end the story.

“How do I know it’s all going to be worth it in the end?”

To finish this novel, Felix took time between his corporate contract work to return to Spain to escape the distractions of life. He looked for a cheap place to live, took time to hike, but more importantly, finishing his book.

The cover of A Voice Beyond Reason depicts the richness of the story’s backdrop. “The cover was designed and created by my New York friend, Erica Heitman-Ford,” Felix said. “I really like Islamic tile work and I wanted the cover to look something like that. But, Erica said people would think the story was set in the Middle East. So, she used the tile idea but put pieces of the Mediterranean that were mentioned in the book, like the olive trees.”

Felix returned home to spend time with his family during the holidays. His family helped celebrate the release of his book with a book release party before he headed back to San Francisco.

“Since the release date, I’ve been doing non-stop social media work. Before all this, I didn’t have a social media presence,” he said. “When I get back to San Francisco, I’ll be looking into bookstores that will be willing to stock copies of my book and schedule book signings. But, for now, my book can be purchased online.”

Recipes for those on the AIP diet, like me!