Arthur Casper, a local lawyer with Casper & Casper, keeps his parent’s spirit alive while helping Miami University students pave way for success by offering a yearly lecture series, commencing with a formal dinner and ending with a presentation of a successful and inspiring individual. The money raised during this event helps students of all walks of life.

“Arthur Casper and his cousin, Jeffrey Casper have been very generous to our campus and to our students. In addition to support these lectures, the family has endowed a memorial scholarship that has supported many worthy students over the years, as well as the Arthur Casper Scholarship that helps students relocated to the Oxford campus.” Miami University staff said.

This year, the 41st Casper Lecture Series, featured J.D. Vance- author of Hillbilly Elegy, A Memoir of a Family and Culture in Crisis. James David Vance grew up in the heart of Middletown’s poorest area, attended Middletown schools, affected by the poor choices of close family members and friends having bumping relationships with drugs, alcohol, and abusive relationships.

“I’m 32 years-old and its sort of audacious for someone of my age to be writing about his life when it’s not even half over. But, I was a student at Yale Law School and I was very bothered by a question and the question was “Why do I feel like an outsider here?” he said. That led him to question, “Why is it that kids from the neighborhood that I lived in and grew up in are not doing especially well, like I did?”

J.D. Vance rose from what he considers a tragic childhood and was basically raised by his rough-edged grandmother, who kept him in line. Although, he feels his childhood was somehow different than those in the area where he grew up, he relishes in the fact that he rose above from the “poorest of poor” and returns to talk about his journey. A thought that anyone in American could do anything and be anyone they strived to be, he writes that this might not be the case in American any longer- that he is likely the exception. That only he had a mamaw and a papaw that came from the hollers of Kentucky- which I believe is true for half of the Southern Ohio residents.

“We think of ourselves in this country that everyone has the same opportunities and that everyone can make it- no matter where you came from, what color you are, what class you are from– if you work hard, you’ll be able to claim your fair share of the American dream. But, what we’re learning is that is not the case for everyone. That not everyone is able to live the American Dream. That too many people grow up on the bottom of the economic spectrum end up staying there and this seems to be a regional problem,” he said.

J.D. Vance’s life’s story is told in his memoir- a memoir that has taken the book industry by storm. Some bookstores are even sold out and has a waiting list. He has been featured on programs such as CNN, Fox News, MSN News and C-Span and more. He has been going from city to city telling his story and his thoughts of an education system that is broken and an economy that is facing crumbling possibilities.

He calls Middletown, Ohio, “the Rust Belt in an Ohio steel town that has been hemorrhaging jobs and hope for as long as I can remember” He also wrote, “Statistics tell you that kids like me face a grim future- that if they’re lucky, they’ll manage to avoid welfare; and if they’re unlucky, they’ll die of a heroin overdose.” He paints a grim picture of a place many of us still call our home and something many of his readers from across the world have nor ever will experienced or know our strengths.

J.D. Vance joined the Marines right out of high school. He served in Iraq, attended Ohio State University, then Yale Law School. He currently works in Silicon Valley at an investment firm. He credits his success to his family for the continued support, but especially his mamaw. In his book, he quotes many things she said. For instance, in the neighborhood they lived, the government allowed section 8 recipients to move in.

“She’s a lazy whore, but she wouldn’t be if she was forced to get a job.
I hate those fuckers for giving these people the money to move into our
neighborhood. I can’t understand why people who’ve worked all their
lives scrape by while these deadbeats buy liquor and cell phone coverage
with our tax money.”

His book was released in 2016. Its initial printing was of 10,000 copies and quickly rose to the the New York Best Seller’s list and has surpassed the 1 million copy mark.

“I’d harbored resentment at the world. I was mad at my mother and father,
mad that I rode the bus to school while other kids caught rides with friends,
mad that my clothes didn’t come from Abercrombie, mad that my grandfather
died, mad that we lived in a small house,” he wrote. 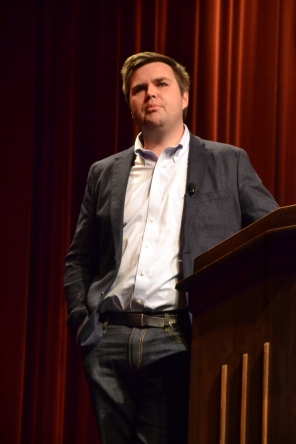 “I didn’t expect anyone to read this book. I remember when it came out I told my wife that I’d be happy if it wasn’t an embarrassing failure. I wanted to do it for my own reasons and I needed to get it out there and down on paper,” Vance said. “I think it went so well because of the current election – the question about the American Dream is the heart of the nation and the promise of change will always be attractive.”

His next endeavor is to form a non-profit organization to help provide more opportunity for the Ohio region and provide upward mobility for those in the lower income class families and to help with the current drug problem that has hit this area so hard.

***What are your thoughts on this topic??