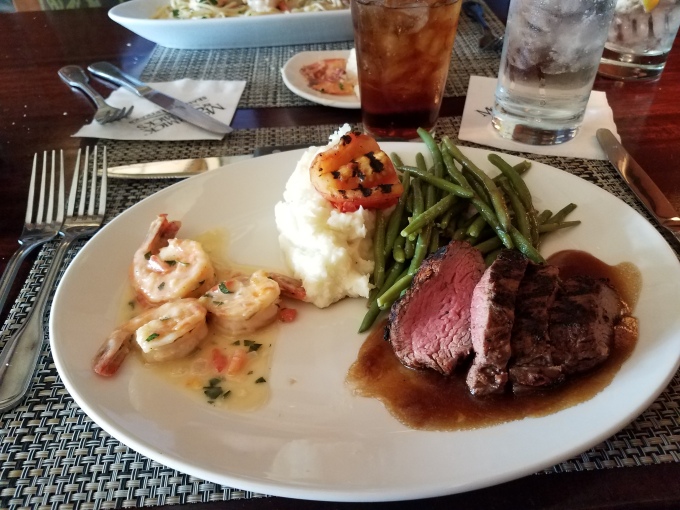 My husband and I visited McCormick & Schmick’s for our anniversary. It was a Tuesday evening after work and we were basically the only people there- a few other tables were occupied, but the place was really quiet, which was nice. The only other McCormick & Schmick’s that we had been to was the one at Newport, which is bright and cheery. The one at The Greene location is dark and not so cheery, but clean and comfortable.

We ordered the three course meal, which includes a soup (the clam chowder was so delicious) or salad, a main dish from a selection of five or six choices, and a chocolate lava cake with ice cream.

Before supper, we were served the most delicious sour dough bread, warm and fresh. I requested the clam chowder, which was too salty but very delicious. My husband ordered the salad- same as most small salads. For the main course, my husband ordered the shrimp scampi, which he said was about the same as any other place – nothing special. I ordered the steak and shrimp with mashed potatoes and green beans. The steak portion was small, which was perfect for me. I ordered it medium rare, which most places have a hard time getting right, but it was prepared to perfection. The shrimp was in a scampi sauce and was very salty but nothing like the green beans. I was looking forward to the green beans the most, but they were caked with too much salt and garlic. I couldn’t eat them. I have a terrible reaction to too much salt intake and this meal was going to put me over the edge. The potatoes were good but the same story applied. Dessert was a small warm piece of chocolate cake with a cold scoop of vanilla ice cream. It was a perfect combination.

To help celebrate our big day, the waitress did bring a plate that said “Happy Anniversary” scrawled in chocolate syrup. It was a nice touch and added to her tip. Good job.

$65 later, we were on our way and feeling very bloated with salt intake. For the money, I think we would have gotten a better tasting meal that didn’t have to be masked with salt someplace a lot less expensive. If we ever visit another McCormick’s it will be lunchtime and I’ll just stick with a side salad and the claim chowder- without the bacon, please.