Recently, the Beavercreek marching band and color guard had an adventure of a lifetime as they took a journey to Norfolk, Virginia to participate in the 64th Annual Parade of Nations [NATO parade]. As with any long distance trip, the band had its challenges, but were able to overcome them as a team and were able to perform to their highest ability to spread Beavercreek’s pride of being a military community and in the meantime, wow the spectators with their performance of America My Country Tis of Thee.

“We had the American flag in front of us and it was really neat to see the Veterans stand up and salute it as we came through. The kids didn’t see it so much because they were in performance mode, but for the staff and parents, we were able to look around and see what was happening and that was really neat to experience,” Beavercreek’s band director, Matt Frost said. 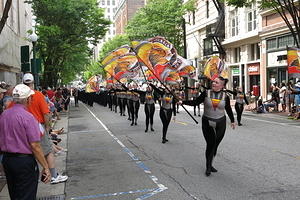 The Beavercreek marching band and color guard was one of 100 parade units consisting of floats and local, national, and international bands to participate in this years’ parade. The SS Wisconsin battleship in the Norfolk Harbor was the backdrop of this 1 1/2 mile event. The NATO festival is the longest continuous parade along Hampton Road that offers colorful floats in-between marching bands. The participants are from all over the world and participants bring to NATO something from their own culture or area. It helps bring the nation together.

“When I saw the Beavercreek marching band, with their white plumes keeping in exact step and lines and playing their piece in unison, in spite of the long marching rows, that made my day,” Retired German Teacher from Milwaukee, WI, Sy Kreilein, Ph.D. said. “With a music background myself, I understand the amount of time and work it takes to put a large group together. Your school’s marching band was the highlight of the parade for me.”

The team formed a caravan to Virginia that consisted of six buses for the 280 students, 25 adults and all the equipment and luggage for the twelve hour, three day trip. “We normally go to Disney every other year, but because of the rising cost and time, we decided to do something different this year. I contacted our travel agent and we came up with a couple of ideas and decided on this one,” Frost said. “Coming from such a huge military community, we thought this would be a great way to show our support.”

According to Frost, the whole town of Norfolk is immersed into their naval heritage.  The concept is comparable to the Olympics where they have different countries representing their country.

“We’re so grateful for the band program that’s led by Mr. Frost and his team. They’re a shining light for our district. They consistently represent us all in such fine form,” Beavercreek High School Principal, Jeffrey Jones said. 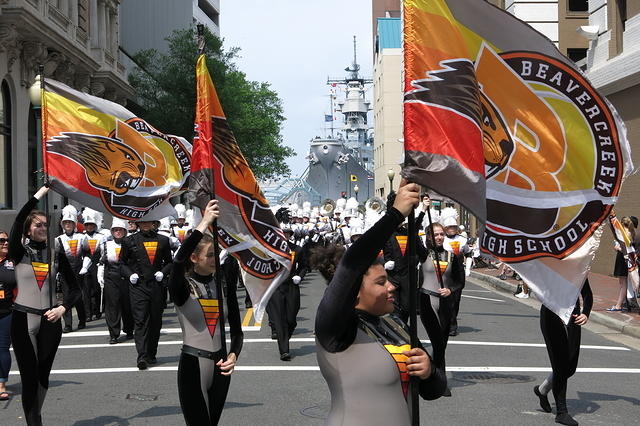 Doug McLiverty, a retired U.S. Army Lieutenant Colonel and docent, tour guide on the Battleship Wisconsin in Norfolk said that he watched the marching band from the bow of the battleship and was amazed by Beavercreek’s incredible performance. “Afterwards, I spoke with several students and parents. Such a nice group of people. There are many reasons to be proud,” he said.

The band’s semi that transports the equipment broke down on the highway about an hour from the parade route at 2 a.m. the day before the parade. After trying to coordinate the best way to get the equipment where it needed to be before the deadline to be lined up for the parade, Mr. Frost informed the students that they would need to be ready and in uniform earlier than expected to help move the equipment. He told them during breakfast. “280 kids dropped their forks to help pull it all off,” Frost said. “That’s the level of commitment these kids have.” The band and color guard practiced 15-20 hours over a period of three to four weeks.

“We are currently fundraising for a new truck to transport the equipment,” Frost said.