Darryl and Tracy Strawberry toured the Dayton and Cincinnati area recently after forming an alliance with Ohio Pastor’s to help stop the epidemic of Ohio’s opioid/drug crisis. The couple made a special appearance, March 5 at the Beavercreek Nazarene Church to help share their struggles with drug addiction in hopes to provide families, friends, and especially addicts with education, enlightenment, hope and the tools for sobriety. The Epidemic of Hope is a collaboration with churches and rehabilitation centers to bring religion back to the forefront. They are both working closely with Mike DeWine in a drug campaign that is sweeping through Ohio.

There’s an average of 12-17 deaths a day in Ohio due to drug use, according to the studies compiled at Mike DeWine’s office. 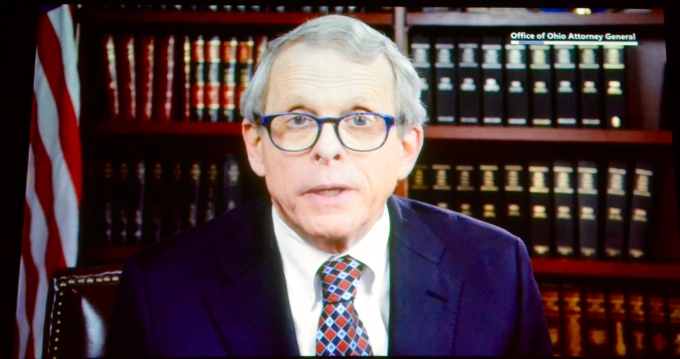 “To really fix the problem, you need to fix the hurt first,” Darryl said. “Our schools are missing education on drugs. The drugs aren’t the same as they used to be. They’re laced with very deadly drugs and we’ve never experienced anything like it before.”

Many baseball fans fell in love with the proficient skills of Darryl Strawberry through his career with the New York Mets and then the Yankees. Many of us couldn’t even imagine being as rich and famous as he. But, his life wasn’t so glamorous or spirited. His soul was full of dark demons that ended up shattering his life – drugs, abuse, affairs, divorce, criminal activity and financial devastation. Growing up, his father beat him and he kept the pain buried inside for so long. This brokenness caused him to turn to drugs and alcohol. It destroyed his life, but he recovered and he is making his second chance at life matter.

“This isn’t like the game of baseball I used to play. This is a real game of life and people only get one chance. We’ve lost so many young people to drugs and we don’t have to lose anyone else,” Darryl said.

But, in his darkest hour, the church is what brought him back to life. Today, he’s clean, sober, and standing beside a new wife that shares his torturous past experiences. To help brighten their past, the Strawberry’s wanted to help other addicts and get them back on their feet. They formed Strawberry Ministries, which includes two treatment centers in the Orlando, Florida area.

Ohio is the number one state for the highest overdoses due to drugs, mostly heroin and opiates; with West Virginia and Pennsylvania falling close behind. “There’s a spiritual brokenness in American with opiates and heroin addiction. It’s not just Ohio, it’s all over,” Tracy said. “Until we fix the spiritual part of it, we the drug issue won’t be fixed. We really wanted to come to Ohio to help. We need to grab hands and learn to walk together and help people of all walks of life.”

The Epidemic of Hope’s goal is to establish recovery churches throughout the State of Ohio. There are more than 280 million people in America that define themselves as Christians. That’s roughly 75-80% of the population. So, the goal is to bring them all together, during this epidemic, to make a huge impact by empowering the addict and providing all information needed in order to kick the habit. It’s a call to everyone, especially churches, to step up and take action, before more deaths occur.

“It’s so easy for people to point fingers at drug addicts and that’s never going to help them,” Tracy said. “We’re so grateful to be in the State of Ohio because we’ve had more kids in our treatment centers from this state begging for help. There aren’t many resources in Ohio.. Florida and California are the number one rated recovery states because we have more resources. It’s easier to get the certificate of need, so the kids are coming down to the state of Florida for treatment.”

The drugs being used today are unlike anything seen on the streets before. It’s not the harmless marijuana that was smoked behind the garage when parents weren’t watching. No, it laced with fentanyl. So, the education can’t be the same. It now requires different tactics and a new plan – which is being developed now.

The majority of drug addicts are festering feelings that have been hidden, building in their bellies- like rape, abuse, emotional issues or even dealing with a death. These are issues that need to be dealt with from the core and brought to the surface to really heal the person. That’s what Darryl and Tracy specialize in.

“If we don’t do something now, we haven’t seen anything yet,” Tracy Strawberry said. “People are suffering- the families and addicts- those lives matter.”